Stacey King on Techniques and Your Alabama Rig 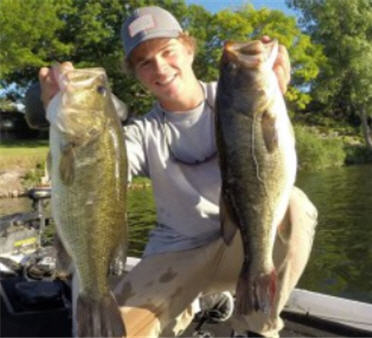 Cooper Gallant is one of Canada’s hottest new fishing tournament anglers, who with his partner Danny McGarry, recently notched a win at the 2017 FLW Canada Bay of Quinte event and the 2016 FLW Canada Championship which qualified him for the 2017 FLW FLW Costa Championship on Kentucky Lake in Tennessee this fall.

He recently took 2nd place at the Ontario BASS Nation qualifier and will join Team Ontario when he’ll fish the BASS Nation Championship in South Carolina for the BASS nation championship for a shot at qualifying for the National Championship.

Gallant has cut his teeth fishing deep weeds on lakes across Ontario, Canada  while fishing for largemouth that live where many other anglers refuse to probe.
We got a chance to talk to Cooper Gallant about his preferred fishing gear and his unique approach to tournament fishing.

Why do Anglers Shy From Deep Weeds?
Many anglers are intimidated by fishing deep weeds for largemouth. Until recently, I wasn’t a fan either until a friend took me out and simplified the whole deal.
First and foremost, if you don’t run electronics, you’re going to be fishing a lot of unproductive water, and if you haven’t learned how to use what you have, you are in the same boat!

His early beginnings at the club level were on the Bay of Quinte which is known for deep-weed patterns. He was immediately hooked on off-shore fishing.

How do You Find the Right Weed to Fish In?

Lowrance HDS-9 Fishfinder / Chartplotter
He explained that on some lakes, largemouth prefer some types of weeds more than others be it cabbage, coon tail, or a myriad of other types of vegetation resident to the waters of Ontario. Once he can dial in the type of weeds that they largemouth are living in, he’ll look for other patches throughout the body of water that he’s fishing.Gallant is a professed disciple of Bassmaster Elite Pro Brandon Palaniuk’s Triangle theory.  “One thing I’ll look for is a spawning bay, deep water close by, and then look for deep weeds,” Gallant said. He’ll use his Lowrance HDS-9 Fishfinder / Chartplotter graphs to look for weed edges and will throw out a crankbait to snag some weeds so that he can tell what kind he’s dealing with. He’ll use downscan to determine the thickness of the weed clumps.

While he prefers to fish weed clumps, weed lines can be productive as well.

He’ll side scan and downscan the weed line looking for a unique feature like a rock pile on the weed edge, a hole, a cut, or a bend. “You need to find something that is different that will congregate these fish into one little area.  This is where you will find schooling fish,” he said.
Sure, you can put the trolling motor down and fish a weed line but it could span the length of a lake and while you might catch a fish here and there, its far more efficient to pick apart a school of fish while targeting specific key areas.

Once finding a pod of fish, many anglers will start fishing. Instead, Gallant will continue to scan the area looking for clues that will better help him understand why the fish are there. Then, he can look for similar areas or features in other parts of the lake should his fish move or the spots dry up.

“The whole, log, rock pile thing is key especially in the fall when the weeds start to die the fish hug closer to that rock weed or wood weed. They do this for warmth and it provides structure to hold on when the weeds dying. Why would they sit in a small weed clump when they could sit in the same thing beside a rock pile or a log nearby to hold on!” he said.

Gallant prefers hard bottom to mud, sand, or moss. “A big weed flat can have fish all over it, but if you can find a slight change in depth throughout that flat, whether it is shallower or deeper than the rest of it, I find that it concentrates the fish into one area. If you can find structure mixed in, that’s a bonus!”

When targeting bigger fish, Gallant won’t even consider a spot that doesn’t have access to deep water.

Strike King Hack Attack Jig
Often, he’ll catch the smaller fish in the school first and while other anglers might move on in search of better quality fish, Gallant will hunker down knowing that a bigger fish is nearby.“You have to find that deeper water nearby.  Those bigger fish don’t like moving as much as the little fish,” Gallant said.

“Another thing we do a lot, that not many people do when fishing deep weed and the bite is tough is throwing a jig like the Strike King Hack Attack Jig or whatever bait we are using 30-feet from the boat and working it all the way back to the boat,” Gallant started.“Most guys throw it in, pop it twice and are already pitching again. When bite isn’t on, I will cast my jig a fair distance and work it all the way back. They tend to follow the bait and stare at it a lot more than we think.”

“There’s always fish deep. After fish spawn, they’ll move out to those deeper weed lines. The only drastic changes are in the fall when they’ll school up a lot more because the weeds are dying and they have that rock pile or log,” he said.

Many times, a cold-front has blown through during a tournament and ruined the shallow water areas that Gallant had located fish in during pre-fish. Yet, the same cold-fronts don’t nearly impact his deep-weed areas as much. He might have to switch up baits or fish slower, but he can get bites much easier in deep water than he can shallow

Rigging up for Battle

When targeting weed clumps, a black, black/blue, or green pumpkin flipping jig like the Strike King KVD Swim Jig is his first choice and he’ll alternate between 3/8 and 1/2 ounce sizes.

When fishing as deep as 15-feet, he’ll opt for a 3/4 ounce jig. He’ll pitch it out, pop it a couple of times and bring it back in.

A 12-inch Texas-rigged worm bait or 8-inch grub bait can also be effective.