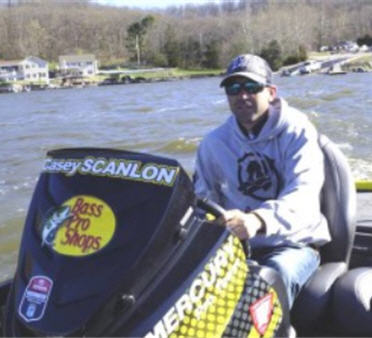 Casey Scanlon is an FLW Tour fishing pro just coming off the 2017 FLW Tour Championship. While his season might be over, he’s still getting plenty of fishing time in and in the fall, you can be sure he’ll have some specialized crankbaits tied on for key situations.

Scanlon prefers flat-sided crankbaits that produce a very tight wobble when retrieved, in highly-pressured situations and cooler water temperatures. Sure, there are exceptions to the rule but this is a good baseline to start with. Absolutely, you can draw key bites in warmer water with a flat-sided crankbait as well.
He’ll fish it around floating docks, dock poles, bang it off dock poles and target suspended bass relating to the corners of a dock.

While he will fish it around laydowns, he knows that he’s bound to get hung up as flat-sided crankbaits do not have the deflecting qualities of a square bill crankbait.

No two baits are created equal, so Scanlon will test out his baits to learn their unique qualities as each is sure to run differently than the next.

Scanlon prefers the Luck-E-Strike RC 2 crankbait and he’ll fish it slower on a 6:4:1 Johnny Morris Signature Series reel spooled with 10-pound Maxima fluorocarbon.  The slower gear ratio brings out the tight wobble that the crankbait is known for that elicits bites. He’ll use a 7-foot medium action BPS Cranking rod to maximize the tight wobble.

Scanlon favors the square bill when he needs his crankbait to deflect off of cover. The crankbait has a square-shaped bill that causes it to hunt aggressively yet deflect off over cover when it makes contact and recover quickly to hunting once it makes contact.
When targeting standing timber, heavy cover, or even open water, especially when water temps are somewhat warmer, the square bill crankbait gets the nod. Be it vertical or overhead-type cover, Scanlon looks to the square bill as a proven winner.
He’ll fish the Luck-E-Strike RC2 Series 2 square bill, a smaller crankbait, that particularly excels around super-shallow cover and when there’s heavy fishing pressure.

Depending on water depth he’ll change the size of the bait he’s trying to mimic, he’ll opt for a Series Luck-E-Strike 3 or 4.

When fishing a square billed crankbait, he’ll opt for a rod with a beefier action, like the 7-foot medium-heavy Bass Pro Shops Cranking Stick. He likes the Johnny Morris Signature Series Reel in a 7:1:1 gear ratio to get a faster retrieve, especially in warmer months.

He will allow for the drag to slip just enough that if a fish charges at the boat it can take line, but tight enough that Scanlon can move fish away from cover if need be.

Tip: If he wants his crankbait to dive deeper, he’ll spool 10-pound test and while that crankbait will run 5-feet deep, by using 20-pound test he can get it to run just under the surface.

While Luck-E-Strike has a myriad of colors to choose from, Scanlon keeps his color choices simple.
When replicating shad, he’ll throw the Spotted Shad pattern.

Later in fall once bass are feeding on craws, he’ll choose a red/black back colored bait or a brown craw pattern.

Scanlon always tunes his crankbaits to ensure that they run straight, and in the case of a square bill, comes back to center after hunting side to side.
He’ll also upsize his hooks if he isn’t getting snagged.  He prefers the Hayabusa TBL 930 treble hook.

Video: How to tune a crankbait