Present Your Lure Right Where the Bass Are 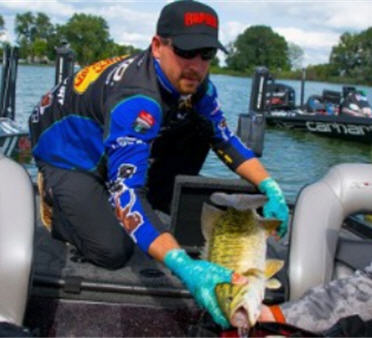 Posted by Pros4- 1Source and  BassProShops1Source

Ott DeFoe’s star has been on the rise for the last several years. With winning tournaments and charming crowds with his amiable personality, DeFoe has pretty much everything a sponsor dreams of as a team member.

Along with his skills on the water, as well as his personality, DeFoe has a very strong personal faith and is a devoted family man. So, it almost goes without saying that he should be able to weather the storm that is being unleashed on him in the form of Three Questions from Pros4- 1Source!!!

OD – In my boat, I can’t live without my Humminbird 360. It’s my eyes under water. For everyday fishing, it works in all the water I fish. It’s so efficient.

The piece I can live without is all of the cameras and stuff in the boat. I’m not a ‘look at me’ kind of guy. I understand it with sponsors and stuff, but I don’t get it overall. Some places I’ve fished nobody ever fished, but now with all the cameras, a lot of secret areas are no longer secret.

DL – What would be the only thing that would make you take time off from fishing as a pro, and what would you do to fill your time?

OD – Something happening with my family that needed my attention is all I can imagine, other than an injury that would take me away from the sport.

As far as filling time, I’d take my kids fishing. Primarily bass, but some crappie, panfish, and walleye, too.

DL – What is the most defining year in your life?

OD – It would be 2011. Our twins were born, it was my first year on the Elite Series, I won Rookie of the Year, and I won an All-Star tournament.