How to Prepare Your Boat for Rough Water 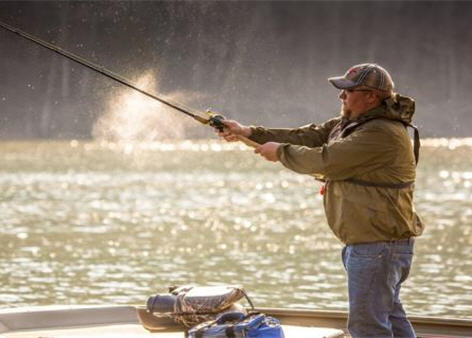 Comparing spinning reels to spincasting reels to baitcasting reels to fly fishing reels is like comparing apples, oranges, mangoes, and bananas. They are all fruits. Each is delicious. However, each has its own fans and is used in different recipes.

As your fishing experience increases and you have new opportunities to fish for more species using new techniques, you will find each type of reel useful. At some point, you’ll probably end up owning all of them. So you can make the right choices for your fishing experience now, and in the future, it’s worth a review of the various rigs, their uses, how they work, and what they are best at. We’ve included an infographic rating each reel type to 13 fishing attributes to help you pick the right reel for your fishing needs. 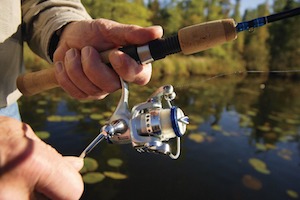 You’ll sometimes hear spinning reels called “open face.” That’s because the line is stored on a stationary spool at the top of the reel. It’s visible at all times. The fishing line comes off the reel and goes under a piece called the “bail.” The bail is a heavy-duty wire and roller system rotating around the spinning reel when you turn the handle. That’s what stores the line back onto the spool after a cast. To cast the line out, you flip the bail open and out of the way which allows the line to flow easily off the spool without resistance. When you begin to turn the reel handle, the bail automatically drops back over the fishing line to rewind it into place.

How to Properly Use a Spinning Rod and Reel Outfit: Note the reel, and the rod guides point downward when held in your strong hand. Usually, the stem of the reel sits snuggly at the base between your second and third fingers. Using your off-hand, you open the bail while at the same time gripping the line near the tip of your index finger on your strong hand. Then you move the rod back over your head to allow the weight of the lure or bait to “load” the rod. At just the right moment, you flick the rod forward and release the line.

Learning to Cast a Spinning Rod and Reel: Casting your rig takes some practice, but it’s not too difficult to master. Since the center of the spool is positioned some distance from the rod handle, the guides on a spinning rod need to be larger and farther from the rod. That’s one easy way to tell a spinning rod from the other kind of rods.

Because the spinning rig creates the least resistance on the line as it is cast, it’s the best for dealing with small baits. It can easily cast lures weighing as little as 1/16 of an ounce or even less. Spinning rigs are also the most sensitive, allowing you to feel light-biting fish better than any other system.

Another advantage is you don’t have to change hands from casting to reeling in, and you’re using your dominant hand to apply pressure when fighting a fish rather than your weak hand. One disadvantage of the spinning reel is that it’s most likely to twist your fishing line because the spool is in a fixed position and the bail spins around it. Think about it as though you were winding a long extension cord around your thumb and your elbow, but while it’s still plugged in. The result is going to be a cord that is unruly and doesn’t stay neatly coiled. The same thing goes for the line on a spinning reel that’s been wound in many times. (The way to untwist the line if it starts causing problems is to let the fishing line off the fishing reel into the water behind a slowly moving boat, but without a lure on it. Run this way for a couple minutes, and then reel the line back onto the reel. Most of the twists will be gone so you can rig up and start fishing again – tangle free.)

Spinning rigs are used for fishing a wide variety of species. Micro-sized rigs catch panfish and small trout. Enormous spinning rods and reels catch some of the ocean’s biggest fish.

Spincasting reels are often called “closed face” or “push button” reels. Both are accurate descriptions. On a spincasting reel, the line is stored on a spool underneath a dome with a hole in its top. At the rear of the fishing reel, there is a button you push in to hold the line in place as you prepare to make your cast. You release that button as you come forward with the rod.

To make a cast, you begin by holding the rod in your dominant hand with the reel pointing up toward you. Your index finger rests on the “horn” on the bottom side of the rod, and your thumb should be comfortably positioned on the button at the bottom of the reel. Push and release the button to allow the bait to hang about a foot below the tip of the rod. You push the button again and hold it in as you lift the rod back over your head. You snap the rod forward and, at just the right moment, release the button to free the line.

While you still have to get the timing of releasing the button just right, it’s easier than getting the feel of when to let the line slip off your finger on a spinning reel, and control with the thumb button comes more naturally. To reel in, you switch the rod to your weak hand and turn the reel handle forward with your strong hand. A partial turn of the handle will automatically engage the pickup mechanism inside, and you’ll retrieve the line as you turn the handle.

Spincast equipment is durable and can handle a good bit of abuse from a beginning angler who might set it down on the rocks or drop it in the water to grab a fish. Another advantage is the line is stored beneath the dome where it’s protected from abuse – and sunlight. Most spincast reels come equipped with the right line for the reel already in place.

While they don’t offer the sensitivity or casting ability with lightweight baits that spinning rods do, nor the horsepower and durability of baitcasting rigs, spincasting equipment is the best choice for beginning anglers. Casting them is the easiest to master, and they come in a wide range of prices suitable to all fishing interest levels and abilities. 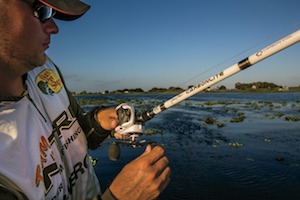 The most popular rig for fishing bass and other hard-fighting game fish is a baitcasting reel and rod. They have the power and durability to stand up to the most rugged fish over and over. These are the rigs you see most in the hands of professional bass anglers for many methods of taking bass. Additionally, modified baitcasting rigs are also nearly the exclusive choice for fishing methods like trolling.

Unlike spinning and spincasting reels, the baitcaster’s fishing line is wound around a moving spool. When a line is cast or allowed to exit the reel as in trolling, the spool at the center of the reel turns away from the angler as the line is drawn off its top. When you turn the handle, the gears reengage, and the spool turns in reverse to take in the line. Casting a baitcasting rig requires modestly more skill, but modern designs incorporating magnets to control the speed of the spool as you cast to make these reels far more reliable today.

Grasp the rod in your strong hand with the reel pointing up toward you. Your index finger rests on the “horn” on the bottom side of the rod, and your thumb should be comfortably positioned lightly on the spool. You push in a button or other mechanism to disengage the handle and allow the spool to turn freely in either direction. Unlike the button on a spincaster, this one doesn’t hold the line on the reel. Instead, you move your thumb back to the line on the spool to gently hold it in place. As you make the same overhead casting motion, you lighten the pressure of your thumb on the spool at just the right moment to release the lure toward your target. However, you must maintain just enough pressure so the spool can’t turn faster than the momentum of the bait is pulling line off the rod.

Getting this just right requires a “feel” that takes some time to develop. While the system of magnets does a pretty good job of containing backlash, your thumb is there to make sure. What causes these infamous snarls in physics. The momentum of your bait pulling line off the spool is fastest at the beginning of your cast and slows the more resistance grows. If the spool continues to spin faster than the bait takes the line out, it tangles … sometimes badly.

Baitcasters generally require heavier baits to cast well, especially for longer casts, and they aren’t nearly proficient at delicate live bait presentations as spinning gear. However, baitcasting reels have the most precise and surest drag systems, which are a big help in fighting large fish. The line capacity of baitcasting reels, especially those made for trolling, is the most of any type of reel.

Some find the switching of hands with every cast to be wearing. In baitcasting and spincasting, you cast the rod with your dominant hand and switch it to your weaker hand to retrieve and fight fish, and use your dominant hand to turn the reel handle. 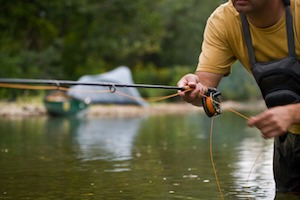 While all the other types of reels pack in the technology to assist in casting, retrieval and fighting fish, most fly fishing reels are little more than devices for storing line. Some fly reels meant for fighting large fish species have the gearing and sophisticated drag systems, but most do not. Instead, you play smaller fish by pulling in the line by hand and grasping it under the fingers holding the rod handle. Once the fish is caught (and released or put in the creel), you then wind in the line to again store it on the reel.

How to fly cast is the subject of many books and videos and will be the subject of many more to come. So for this comparison, let’s just say it’s not at all like casting spinning, spincasting, or baitcasting rigs. Instead of the weight and momentum of the bait pulling the line from the reel, in fly fishing, it’s the weight and momentum of the fly line itself pulling the line from your hand and out the guides on the rod. For this reason, fly rods tend to be much longer than any of the others, and the guides have the lowest profile to the rod.

In spinning, spincasting, and baitcasting, your casting hand is positioned at or below the reel. To cast a fly, your hand grasps the rod handle ahead of the fishing reel. Needless to say, fly casting takes the most experience to learn. Many fly enthusiasts will tell you, making long casts is a form of art that takes a lifetime to develop.

Here’s a comparison rate chart of the four basic types of fishing reels with #4 being best for the listed application . Click here to view the full-size, printable PDF of the fishing reel infographic.