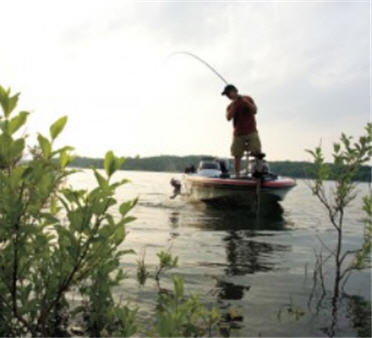 Posted by:  Keith Jackson and  BassProShops1Source

There’s been a lot of buzz lately about the Ned Rig. Manufacturers are bringing out jigs, soft-plastic lures and rods designed specifically for this style of Midwest finesse fishing for bass.

Even Bass Pro Shops has its version of the Ned Rig jighead as well as others manufactured by other companies. It also carries the Z-Man line of soft plastics designed specifically for this way of fishing.

Bass fishermen are discovering that fishing with this little bait in this particular method is deadly. Granted, you have to weed through small bass to get Mr. Big, but the Ned catches all sizes.

It’s a finesse technique that is pure action. It’s great for lots of fish, and it’s a great technique for those who don’t fish much. Another bonus is that it doesn’t require expensive, specialized fishing gear.

Tip Watch video: Finesse Fishing: What it is and When to Use it

How Finesse Fishing the Ned Rig Got Started

Ned’s history starts in the Midwest with the invention of the Beetle Spin. In the middle of the last century, fishermen in the Kansas City area discovered that the grub body of the Beetle Spin worked well when fished without the spinner.

It wasn’t long before Gopher Tackle’s mushroom jighead was added to the arsenal, and that’s when this technique took off. While the soft-plastic body has changed dramatically, the mushroom head still is a key component.

The flattened head of the jig protects the front of the soft-plastic body, and the small, sharp hook doesn’t hang up as much as a larger hook would. Plus, the small hook lets the soft-plastic body move more, and while this lure usually is fished in a very laissez-faire way, the subtle movement of the body can be a trigger for fish.

The small hook does a good job of hooking and holding bass despite its size. Originally, Gopher Tackle’s mushroom head was used in conjunction with 7-to-10-inch worms.  The lures were cast to the edges of weedbeds, and the light jig would allow the worm to slowly fall down the edge. The small hook did a better job of ripping out of the weeds than a larger hook would.

The Best Delvery System for Fishing the Ned Rig

Rigged correctly on light gear, the Ned Rig is easy to fish. Most fishermen use spinning rods as the mushroom jigheads generally run from 1/32 to 1/16-ounce, but on windy days or in deep water up to or a tad bit more than 1/8-ounce.

While virtually any fishing rod that can be used with similar weight lures will work, most devotees prefer rods of light action with a fairly fast tip. The one caveat is that the rod must have enough butt or backbone to handle a large fish because the Ned Rig will catch them.

Line choice can vary with personal preference or dictated by the situation, but six or eight-pound test monofilament or fluorocarbon fishing line like Bass Pro Shops Tourney Tough Monofilament Fishing Lineseems to be standard. Superlines also work well, but the lack of stretch can become a liability when a big fish is hooked. Monofilament provides more cushion in that circumstance.  Regardless, a short leader of mono or fluorocarbon on the superline is a good idea.

The Anatomy of the Ned Rig Fishing Lure

The mushroom jighead is a big part of the lure as noted above. Gopher Tackle has its selection as does Z-Man and a few, smaller manufacturers.  Bass Pro Shops carries a line of jigs like the Bass Pro Shops Shroom Heads that designed for the Ned Rig.

And for those who like to roll their own, Do-It Molds has a mushroom-head mold.

The soft-plastic body has evolved from the original Beetle grub to half of a stick worm like the 5-inch Yamamoto Senko.  While preferences vary, 2 ½ to 3-inches seems to be the length that most fishermen prefer. While most stick worms have a tapered tail and thicker head, Ned Rig aficionados have found that it doesn’t matter which end you use. Both work.

The latest additions to the pantheon of soft plastic lures are those made by Z-Man of its proprietary ElaZtech plastic. This material is much lighter than traditional soft plastic, very flexible and it is much more durable. A standard stick worm half might only last for a few fish, while the ElaZtech version will last for days of fishing.

The key to the longevity is to put a little drop of super glue on the jighead before sliding the body into place.

Colors can vary with the clarity of the water, but green pumpkin in all its variations is good, as are purple, black and earth tones. One killer color is peanut butter and jelly. Bass Pro Shops Split Tail Stik-O comes in peanut butter and jelly, slap it onto a mushroom head or any Ned Rig-style setup, and magic happens!

The Simplicity of Fishing the Ned Rig, The How…and the Why

It works well near cover or on open banks with no cover. Let it sink near a dock or pull-and-drop it down a rocky bank. You can fish the Ned Rig anywhere you would fish an open-hook jig.

Cast, let it sink for a count of five (or whatever seems to fit) and slowly reel it in.  There isn’t a wrong way to retrieve the lure, but the main point is to repeat whatever worked once a bass is hooked.

That’s one of the advantages of the small, sharp hooks, especially for beginning fishermen. There’s no need for a “cross their eyes” hookset. Simply let the rod load, and then sweep-set the hook. And there’s also a good chance that simply reeling in will set the hook in the bass.

The Ned Rig really is a perfect technique for beginning fishermen.  However, it’s also a good technique for any bass fisherman as Table Rock fishing guide Bill Babler knows. He includes it in his repertoire.

Tip: When a lure or method of fishing is good enough for guides to start using it, then it’s one that should be on the front deck.

While the Midwest is getting more of the attention with the Ned Rig, other regions and very similar lures/techniques have been around for quite some time.

Tennessee’s Charlie Brewer and his Slider method of bass fishing is very similar; although, the soft-plastic bodies he used are small worms. The range of soft plastics is now much greater than the original 4-inch worm.

On the West Coast, bass fishermen from California to Washington developed their own style of finesse fishing. This combined light line (four-pound test or lighter), small jigheads and Bobby Garland’s 2-inch Swimming Minnow and ringworms for smallmouth, spotted bass and largemouth.

Tips for Finesse Fishing: What it is and When to Use it