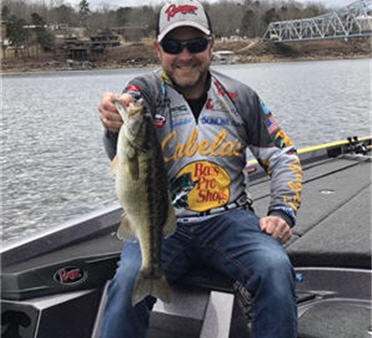 During the late winter and early spring, while many anglers wait to take their boats out of storage until warmer weather arrives, Bass Pro Shops Cabela’s Fishing Pro Mike McClelland not only has his boat ready but a game plan in place also.

“In the spring, fish aren’t looking to eat but they’re looking to warm themselves,” McClelland started. “If you present the right bait at the right time, there’s definitely the opportunity to catch them.”

Breaking Down the Lake

For McClelland, anytime he’s fishing a lake in the US in the early spring, he’ll pick a section of the lake and break it down. One factor that helps him select one area over another is the presence of a tailrace because if one is present, the water will be warmer up the river.

On a natural lake that doesn’t have one, where the lake is going to be pretty consistent throughout the course of the lake, he’ll target the North side of the lake. He says the face of the lake won’t catch the north wind during the coldest months of the year.

“You have to do your research and figure out what section of the lake will come on sooner than the rest of the lake and you try to break it down,” McClelland said.

McClelland fishes the White River Chain of Lakes; Beaver Lake drains into Table Rock and Table Rock drains into Bull Shoals. Typically, the upper region of those lakes is the warmest as it flows out of the bottom of the lake with temps ranging between 48- to 52-degrees year-round when they are generating water through the dams.

“As you get into the spring and the water temps start to moderate a bit. I’ll focus on the northern banks of the lake because they don’t get beat up as much from the north wind and will be a few degrees warmer,” McClelland said.

Regardless of the technique, his cadence will be slow and methodical.

“Those fish are sunning and are not necessarily interested in feeding It’s all about getting the bait into the right position and coaxing them into biting. It’s going to be a slow methodical presentation,” he said.

When fishing cold water, it’s all about finding the warmest water possible.

On the White River Chain of lakes he calls home, the winter will drive water temps into the upper 30’s and low 40’s. After the first 3 or 4 rains in the spring, after the lakes have been drawn down for winter, the spring rains produce sawdust mats that are formed in the back of pockets.

Once the run-offs cease and the sun comes out, bass will sun themselves to warm up and heat up the mats. Once the sun begins setting, bass will locate beneath those mats to maintain that same warm they’ve had while sunning all day, McClelland says.

McClelland is an outspoken proponent of the Panoptix feature offered on Garmin units because of versatile and efficient it makes him as an angler.

“I can pull up into the back of a run-off pocket and actually look up under the sawdust mats and see if there are fish underneath,” he said.

All he needs is 3- to 4-feet of water beneath the mat that adds some “depth separation between the floor of the body of water you are fishing and the bottom of the mat”.

Very seldom does McClelland catch fish holding to the bottom beneath a sawdust map- most often they’re suspended just under the mat.

Often, he’ll use a jig and chose its size based upon what’s needed to penetrate the mat. After he gets the jig through, he will not allow it to go all the way to the bottom. Instead he’ll pull the jig up just beneath the bottom of the mat as that is where the bass will be holding to feel the heat permeating from the mat.

Experience has taught McClelland that the most important part of fishing a dock in cold water is the material used to keep it afloat. McClelland only fishes docks that have dark colored floats.

“It’s all about the warmth that that black float absorbs the sunlight through the course of the day so it is going to radiate heat even through the course of the day once the sun falls away from it just like the sawdust mats,” he said.
There are times when bass will suspend under docks and for whatever reason it really intimidates anglers McClelland says. “As long as you know the range the fish are trying to be at and have the ability to analyze that with Panoptix on my bow-mounted Garmin GPSMAP 7610 chartplotter fishfinder combounit, it makes suspending fishing just like any other fishing you do. It’s all about presenting a bat at the right depth,” he said.

Tip: Panoptix sonar gives you the ability to see all around your boat in real time and in 3 dimensions. Panoptix transducers are available in Forward and Down configurations with mounting styles.

He’ll consider the conditions, bait size he is trying to replicate and the depth fish and decide between a Spro McStick jerkbait models 110, 95, or 85.

He’ll fish the Spro McRip jerkbait which sports a spoonbill lip that helps get the bait down when fish are 10-feet or deeper usually during the pre-spawn.

In less than 10-feet of water, he’ll fish the McStick 110 while the 95 excels when he’s trying to mimic smaller forage like threadfin shad. Both jerkbaits are meant to be fished higher in the water column.

He has found that sometimes a big soft-plastic swimbait works better when bass are holding deeper.

His bait colors will be dictated by forage. When targeting docks, he’ll select shad colored baits as that’s what they’ll be feeding on. Bright sunny conditions and clear water call for ghost and transparent colors that the sun can pass through.

Gearing Up to Match the Technique

Using a variety of Falcon fishing rods in his signature series the Falcon Cara Micro rod line ranging from 6-8 to 7-4, that he’ll match to the technique. He’ll always throw the 6-8 jerkbait rod to allow him to best work the bait while a 7-2 rod helps make the longer casts required to fish a swimbait effectively. A 7-4 heavy action rod works best for McClelland when targeting thick vegetation.

He’s exceptionally selective about the types of line that he uses for specific techniques. When fishing a jerkbait in cold water, he prefers Sunline Super Natural Nylon Monofilament fishing line in cold water but as the water warms, he’ll switch to 10- to 14-pound Sunline FC Sniper or Shooter line.  The latter is a fluorocarbon that has even less stretch helping for driving the hooks home and when the bite is light to assist with detecting bites.