How to Master Fishing a Brush Pile – Gerald Spohrer

How to Master Fishing a Brush Pile – Gerald Spohrer 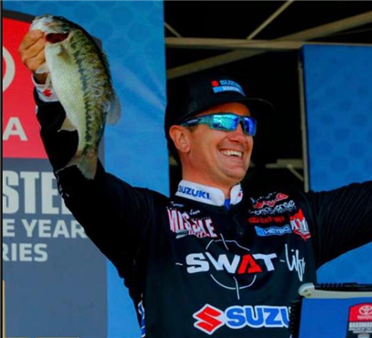 Posted by  Jonathan LePera and BassProShops1Source

Gerald Spohrer has been lighting the Bassmaster Elite trail on fire this past season. Despite growing up fishing the Atchafalaya Basin in Louisiana which is devoid of brush piles, once he fished Toledo Bend, he quickly realized that he had to master fishing a brush pile with a worm. Today, it’s his “go-to” lure when breaking down brush piles.

Telling a Good Fishing Brush Pile From a Bad One

Fish habitat is placed on the bottom of lake by barge.  photo credit Ozarks Water Watch

Depending on where you are targeting bass in the country will dictate what anglers use to build their brush piles. Brush piles are man-made structures made of the resident wood type around the lake that anglers cluster together and strategically sink near key areas where bass and crappie are known to frequent.

Disclaimer: please check your local DNR regulations to ensure that sinking brush is indeed legal in your State.

On a lake like Sam Rayburn in Texas, crappie fisherman use willow trees to construct their brush piles. Anglers will pour concrete into the bottom of a pot and stand willows inside them to create vertical cover for  crappies as they stack in the water column.

In other parts of the country, bass fisherman like to lay their brush piles horizontally along the bottom because their baits come through them better and bass relate to the bottom.

Anglers will always use the specie of tree(s) surrounding the lake.

Spohrer favors fishing cedar brush piles as do many bass anglers because they last longer. “You could put out a cedar tree top, sink it, and catch fish from it for 10-years. A willow, after a year or two, once the leaves disappear, they stop producing unless someone replenishes them,” he said.

The reason Spohrer fishes brush piles with a worm is because it is efficient and functional when fishing deep brush. There is no bait better than a Texas- Rigged worm, he says. “You can throw it right in the middle of a brush pile, it gets down there real fast, you have good feel with it, and the shape of it has more of a presence than a jig,” Spohrer said.

Tip: How to Setup the Texas Rig

According to Spohrer, there isn’t a fisherman out there who fishes a brush pile lake without a Texas-rigged worm at the top of their list.

Spohrer has developed great confidence in the Tomahawk Worm after years of success fishing the bait.

Spohrer believes that the two tails affixed to the bait offer a huge advantage above all others.

“A big straight tail or ribbon tail worm, when its sitting in a brush pile, it’s the tail that gets the bass’ attention. A single tail worm is tough to see as it sits in that thick brush pile. The tail on a Tomahawk Worm is like a flag waving in the air,” Spohrer said.

While some anglers might fish a shaky head paired with a big worm, finesse fishing in this situation isn’t Spohrer’s style. “Those fish in brush piles typically aren’t finesse style fish- they get in brush piles to feed because those piles attract everything else. Typically brush pile fish are easy to catch,” he said.

Most of his brush pile fishing is done on Texas-based lakes so he’ll opt for plum or blue fleck most of the time. Under sunny conditions when the water is super-clear, he’ll use watermelon/red instead.

Pick the wrong hook and a plastic worm will ball up on a hard cast or bunch up on the hook and make a “U” between the hook point and where it sits on the shoulder of the hook. In turn, Spohrer cautions anglers that they’ll get hung up in the brush every cast- the worm has to be perfectly straight. He prefers a 5/0 VMC Ike Approved Heavy Duty Fish Hook which has a should with a slight tip in to help secure the worm. It also has a sealed eyelet which protects his knot.

Once he feels the bite, he’ll reel down on the fish and use a hard-sweeping hookset to button the fish.

Spohrer pointed out that when a bass eats near a brush pile, he’s usually already back in the brush pile by the time the hookset comes. It’s important to get the bass turned around and out of the brush pile immediately.

Worm anglers have forever debated whether to peg their sinker or not. Spohrer believes there is a time and place for each. That said, he’ll always use a ½-ounce Beast Coast Tungsten worm weight paired with 20-pound Sunline Shooter spooled on a high-speed casting reel and 7-6 flipping stick fishing rod.

An unpegged sinker allows it to fall into the brush pile while the worm stays above the wood.

“Sometimes you don’t want your worm to go down in there because the fish won’t go in to the brush to get them. If they’re relating to the outside of it, you want to ensure that your worm stays on the outside of the brush,” he said.

If he fish are buried deep in the brush, that might be a tight to peg the sinker to allow it to get to the bottom of the pile.

That said, he’ll peg the sinker most of the time. “It’s more efficient and there’s less chance to get hung up. I’m more likely to land the fish when the sinker is pegged because they can’t use the swinging weight as leverage to dislodge the hook,” he said.

How to Work the Brush Pile

He’ll mark a brush pile, line up on it, make a cast, and within seconds be down on the bottom he’ll start pulling the worm along. He’ll purposely try and hit the brush and upon doing so, he’ll hop it around the brush pile careful not to get hung up.

Working the perimeter, he’s hoping to pick off any bass that are on the edge of the pile or have ventured outside of it. If he’s confident that bass are inside the pile that he’s targeted, he’ll get hung up on purpose and try and move the pile and shake it to get a bass to come out of it to get the worm he pitched in.

Growing up in the swamp lands of Louisiana, Spohrer didn’t get to fish worms or brush piles much. That opportunity came once he started getting serious about his fishing an began visiting Toledo Bend, a big fish factory and brush pile lake.

That said, he never felt like he was any good at brush pile fishing- until he learned how to fish them quickly.
He admits, he was never one of those anglers who excelled at triangulating (a technique using 3 landmarks from different directions to consistently return to the same spot on the water every time before the GPS system was introduced.)

“There’s brush pile fisherman out there that will literally run across a lake line up two or three trees on shore and one dock and hit a brush pile every time. Those guys fish that lake every day- they put those brush piles out,” he started. “I was never that guy. I was always the guy who went to the lake, idled around, found the brush pile and then it took me 20-minutes to line up on it and find it with my worm. I used to hate brush pile fishing because of that.”

The way Spohrer used to do it was he would pass over it, toss over a market buoy putting him somewhere close to the brush pile and then graph around the marker buoy. “When I was done, I would reel up the marker buoy and go to the next one. It was extremely inefficient, time consuming, and aggravating so I never liked it,” he said.

Today, he relies on the Side Vision feature afforded by his Lowrance HDS-12 Carbon Fishfinder GPS Chartplotter units with touch screen technology. Now, he can see a brush pile 100-feet to the left of his boat, touch that brush pile on the screen and mark a waypoint directly on it. He’ll use the compass antenna feature to show the direction that his boat is pointing regardless of whether it’s moving or not.

The trick that changed for Spohrer was he’ll set a heading vector that draws a line directly off the bow of my boat and then set the range rings around his boat which measure in 25-foot increments.