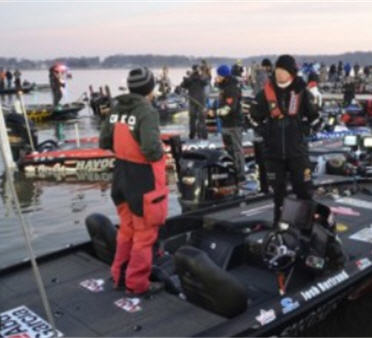 Many people think that because a professional fisherman makes their living fulfilling sponsor commitments and fishing tournaments that they have all the answers.

At the end of each season, any tournament or recreational fisherman, worth their grain of salt, will reflect on their season. It might be memories marked by difficult days on the water and decisions gone wrong, or when the planets aligned and everything went their way.

Check out the very honest and candid answers from what these eight professional anglers had to say about the most important lessons they learned, both on and off the water, as they reflect on 2017.

“The lesson I learned a few times in 2017 is that when I thought I was out of it, I wasn’t,” he said. “I’ve learned in the past couple of years not to get down on myself and just do what I do. The things I used to worry about, I don’t.”

Today, Greg Hackney has found piece-of-mind and knows his test is truly between him and the fish. “I still love to fish as much as I ever did, but I’m learning not to care what people think or what everyone else is doing,” Hackney said. “I’m probably the best I’ve ever been at doing my own thing regardless of how it turns out.”

“Dock talk” has ruined more days on the water than I’m sure it has helped and it really doesn’t make a whole lot of sense.  Whether a seasoned angler or recreational fisherman, the minute they have a pang of doubt, they look to someone for the answer.

“I am so much better to stay away from everyone when it comes to fishing. I’m learning I’m much better off- do not talk to anybody just do my deal,” he explained.

This was a ghost that haunted him throughout his career and even carried over from 2016. He can point back to moments during the 2017 season where he listened to people he respected and changed his game plan when he should have trusted in his instincts and abilities.

That said, talking with some trusted peers at the end of a tournament is good not only to find out where you went wrong, but also reaffirm what patterns weren’t working for others.

Chris Johnston looked back on the 2017 FLW Tour and shakes his head in disbelief after not qualifying for the FLW Cup.

Despite qualifying for the Cup during his rookie year in 2016- he failed to back up that success last year and the reason was evident, he too listened to others.

“The most important fishing lesson that I learned on the Tour this year was just to put my head down and fish my strengths no matter what lake I go to,” he started. “I got caught up in too much dock talk this past year on the tour and I really feel like that hurt my practice pattern.”

Next year, he’ll go back to doing his own thing which always treated him well in the past.

Brandon Palaniuk is the reigning Bassmaster Elite Angler of the Year. Not once did he track his points or position on the leaderboard. What is more impressive is that he overcame a disastrous start at Okeechobee and still took the title.  His secret? Fish the fish.

“Having that mindset of they are going to be where you find them came from a group of guys I hang out with at home and we often joked about it,” Palaniuk started. “This year, I took it serious and it allowed me to fish with an open-mind and not have any preconceived notions or not try to force anything.”

Sometimes anglers try to force patterns for a variety of reasons.  Perhaps they had prior history on a certain body of water or maybe they thought that a specific lure was always the best way to catch bass in a certain situation.  This year, Palaniuk would hear none of it.

“I had a very simplified approach to this season. It was about making decisions about what I thought the current conditions were and not using any information I had found online or if I had been there. I used that knowledge as a tool to understand what was going on but I didn’t rely on it,”he explained.

Jason Christie has been an incredibly consistent angler throughout his professional career. In 2017, he placed second to Palaniuk in the Angler of the Year race. Known as a skilled hunter and angler, his instincts have helped him more than lead him astray. Where Christie finds he gets into trouble is when he overthinks things.

When the 2017 schedule was announced, he circled one tournament that he believed he would do best in. Dardanelle suited his style of fishing and felt he had a great shot about how he thought it would fish. It was the worst finish of the season.

“Fishing is a sport that you can’t look out in the future and make assumptions about how it is going to go down. You have to go out there and play it minute-by-minute and fish the way you are most comfortable,” Christie learned.

Rarely does a pre-fish or tournament pan out exactly how anglers figured based on the weather. After all, you have to fish the current conditions, not what worked during practice.

Christie has learned to keep an open mind until he drops his boat in the water for the first day of practice before his tournament. That said, he stresses the need to fish the moment.

“I feel the difference between this year and years previous, is I turned some poor practices into some great tournaments,” he started. “At the Potomac, I did not catch squat during practice but then I finished second.

Known as one of, if not the best, bass anglers of all time, Kevin VanDam’sreputation precedes him. Not just as a multiple Bassmaster Classic and Angler of the Year champ, but as a power fisherman who can siphon water for any species of bass with impressive speed and efficiency.

Sometimes, speed isn’t the best approach and VanDam has learned that there it is equally important to allow patterns to unfold, fish to turn on, and knowing when to use his wisdom to decide to move on or change things up.

“The biggest lesson that I continue to learn, and it can go both ways, is trying to be patient to allow a pattern to develop,” he said. His competition is the best it’s ever been and his run-and-gun approach is risky especially with the talent pool on the Bassmaster Elite Tour.

“If you have a location that has a group of fish on it, you have to make the most out of it. I’ve learned not just this year, but to just allow things a little extra time or a few different presentations or baits to allow a pattern or a spot to pay off for you,” VanDam said.

Admittedly, he is not a very patient angler- but he’s working on it.

“Day in and day out, I think that patience comes with time in terms of when to go and when to stay,” he said.

When VanDam didn’t qualify for the 2015 Bassmaster Classic, he didn’t hit the panic button. He didn’t see the need to reinvent his game, but for those who have closely watched his tournament success during the 2016 and 2017 seasons, surprisingly he matured as an angler.

One might point to Day 2 of the 2016 Bassmaster Elite event on Toledo Bend when his live well was pretty light as he headed into the afternoon.  Despite insurmountable spectator traffic, some of whom even fished in front and behind him as he probed key structure with a crankbait, he stayed the course and remained confident and collected. Consequently, he won the tournament by 8-pounds over the nearest competitor.

Mark Zona of Zona’s Awesome Fishing Show spends every waking second on the water filming his show or fishing with his boys, Hunter and Jakob. History has taught him many lessons on the water but he’s wise to leave them as that and start fresh each year. “I’ve learned to stop thinking I know all I need to know. Now, I try to go into every year with a complete blank slate from a technique stand point,” Zona said.

Between his show, his involvement with Bassmaster Live, and his family, he doesn’t have much time to spare. He’s learned that if he doesn’t stop to appreciate all that is around him, live could just pass him by.

“I’ve come to realize that I can’t take my days with friends and family for granted anymore. Life moves fast and if you don’t stop and enjoy the ride, you lose why we do this,” he started. “Catching them is great, but the time with your friends/family is priceless. I tend to sometimes look past that.”

Bassmaster Elite angler, Mike Iaconelli had one of those seasons that truly tested his mettle. One missed fish here, a poor tournament there, and by the end of the season, Iaconelli saw himself looking from the outside in. He finally qualified for the Classic on a technicality and while it wasn’t the way he wanted to do it, he’s more than appreciative for the opportunity to make amends and prove he’s still a threat in any tournament.

As he reminisces, he really can’t pinpoint one decision or lost fish that put him in such dire straits at the end of the season.

“It’s the little things that add up. If I had to turn that into something solid I learned, it was how important each fish is, from a tournament perspective,” he said.

Iaconelli does his best not to dwell on the negative but during his drive home from the last event of the season, he can’t help but replace the missteps or lost fish. They weren’t always a 4-pound fish that could have culled a 2-pound fish, sometimes he just needed to upgrade with a 2-pound fish.

In hindsight, he knows he ditched a game plan that has served him well in the past. Iaconelli makes every effort to have at least 2 or 3 patterns or areas to work into his daily rotation or to fall back on.

Where Iaconelli realized he dropped the ball was in too many of those tournaments, he only had a Plan A without the security of a B or C back-up plan.

“You always want to go out to practice for multiple patterns and areas. I can’t remember the last time an event where 1 deal held up over 3- or 4-days,” he started. “When I look back at the events where I think I had a chance to win, there were 2 of them; Cherokee Lake and Dardanelle. At Cherokee, I had two patterns and at Dardanelle I had 3.”

Shaking his head, he points to poor finishes at Okeechobee or Ross Burnett, two of his worst tournaments of the season. He fished a single pattern in each.

Ott DeFoe has become one of the most consistent anglers on the Bassmaster Elite Tour. Recently, he changed his game plan to keep that success going.

“I’m going to try to win the first day of event- not just try to get by first day,” he said. “I’m going to go for the throat from the start.”