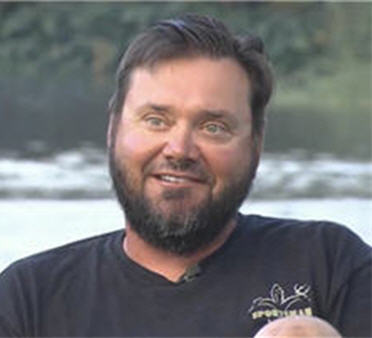 Greg Hackney is arguably one of the best largemouth anglers in the country. Read his interviews or pull him aside for a quick chat, and you’ll quickly learn that it is always go time.

Some anglers look at the post-spawn as a glass half full. They know that the largemouth will be tired and beat up from the spawning process and believe they won’t be all that active.

Hackney is of a different mind-set. He knows that the largemouth will be lazy but they’re opportunistic feeders.

Regardless of where you are fishing in the country, the post-spawn will be immediately followed by the threadfin shad or blue gill spawn or the mayfly hatch out.

“If any of those 3 things are happening, there will be a group of fish that linger shallow,” he said.

His favorite is the shad spawn as it transpires just as the females come off the beds and there are a few males still guarding bass fry.

Hackney noted that the gizzard shad spawn takes place later in the post-spawn while the threadfin spawn happens just as the bass come off the beds, there’s never a gap regardless of what part of the country you are in.

“It’s the perfect storm and the way that natures set up,” he said. “Largemouth are run down from the spawn and there’s the shad spawn which is a really easy time to gorge, so the two deals go together.”

Because the shad are spawning they don’t have any fear, Hackney says. They are not seeing any predators as they are going through their life-cycle by reproducing.

Hackney will be on the water at first safe light as threadfins spawn all night and the only time to cash in on that deal is within the first 45-minutes of daylight or the last 45-minutes of the day.

In that span of time, it isn’t uncommon for Hackney to load the boat with 20- to 25-pounds of bass on the right lake.

2. Where to Look for the Shad Spawn

In the South where Hackney lives, shad spawn on hard bottoms, matted vegetation, cypress trees, and boat docks. Docks made of Styrofoam are the worst for the environment and are quite hard to find now, but when you do, you can bet that threadfin shad will spawn on those old marina docks as they like them the best.

Once the early morning bite dies, Hackney will look for natures cues like the presence of blue herring and white egrets as they are the usual culprits that gorge during the threadfin spawn as well.

On some bodies of water, threadfin shad will spawn on concrete or around sea walls.

On the Tennessee River, they’ll spawn on the bank but the better shad spawn on shell beds, shallow bars located in the river in 5- to 6-feet of water in the river. where the better fishing takes place.

“A lot of times there, the visible shad will have little bass on it but the better fish will be on the shad out on the deepest bars, shell beds, mussel beds and hard bottom,” Hackney said.

When the Elites used to visit Guntersville, Hackney remembers the threadfin would spawn on the grass and there was no better technique than reeling a spinnerbait over that grass.

“You couldn’t visibly see the shad so you had to fish till you found them so you would roll that spinnerbait over the grass. Those male shad will always be attracted to the blades of the spinnerbait so you’ll always have 7 or 8 shad with your spinnerbait as you bring it in,” Hackney said.

Hackney tries to match the size of the blades to that of the bait that bass are feeding on. He wants the bass to hit the fishing lure, not the blades. That said, when the water is dirty he’ll opt for a Colorado/Indiana or double Colorado blade configuration which a Colorado/willow excels in clear water.

Regardless of the water clarity, he’ll use a medium to slower retrieve. “If you reel it too fast you’ll pull it away from the shad,” Hackney reasoned.

That’s why he’ll fish a Quantum 200 HD fishing reel with 6:6:1 gearing spooled with 16-pound Gamma Edge fluorocarbon fishing line on a medium-heavy action KVD Tour Graphite rod. He’s careful not to impart any action unto his spinnerbait throughout the retrieve as it will spook the shad and the bass that are feeding on them.

White/chartreuse is always a skirt color to start with but generally, regardless of the bait he’s throwing, he’ll fish brighter colors in dirty water and more translucent natural colors in cleaner water.

Hackney won’t put all his eggs in one basket, that’s why he’ll also fish a bladed jig, and a square bill crankbait. “Depending on water color, if you go to those places where the shad spawn a little deeper, I like a crankbait that I’ll match to the size of the shad,” he said.

Most often, a version of the KVD square bill crankbait will reach the depth he’s intending to hit. He’ll change out the factory trebles with a short-shank EWG style and he’ll up-size the fishing hook but he’s careful not to negatively impact the action of the lure.

“The shad are like the bass, they are not going to spawn deeper than the light penetration. It takes so much light for their eggs to hatch, that’s the same reason a bass doesn’t spawn in 20-feet of water when the water is dirty,” Hackney reasoned.

In extremely clear water, he might opt for a Strike King Caffeine Shad bait or a jerkbait like the Strike King KVD Jerkbait.