For the Love of the Game: Jimmy Houston

For the Love of the Game: Jimmy Houston 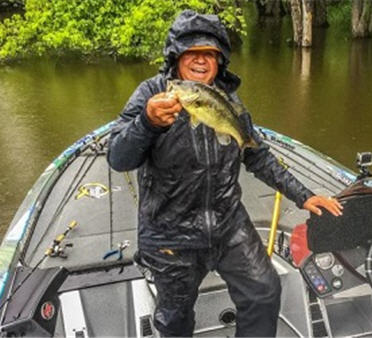 Article by: Dave Landahl and BassProShops1Source

Jimmy Houston is a name synonymous with bass fishing for the last 50 years. Whether you know him from television shows or tournament bass fishing, Houston has been a “go-to” pro angler promoting the sport of fishing in print ad campaigns, television commercials, his own TV shows and on stage at national fishing derbies.

At 73-years old you’d think Houston may want to slow down a bit, relax, smell the roses, etc. Not Jimmy. He seems to thrive off the action, continually pushing himself and putting himself out there as an ambassador for the fun of fishing.

So, how does this legend in the sport of bass fishing stay motivated to go toe-to-toe against anglers he’s three times older than? Simple, Jimmy loves to go fishing and share his passion for the sport.

“Except for a few extra aches and pains, I don’t think 73 is old. Okay, I feel about dead after an event, but I felt that way when I was in my 20’s too.

“I fish hard, very aggressive, I like to turn that reel handle.”

It’s not just the tournament game that keeps Houston on the water. Fishing is the secret.

“I just love to fish,” said Houston. “Even when I’m at home I go out in my kayak or boat and fish. Even if it’s really cold, I’ll still go out on the dock and make a few casts.

“I fish about 130 days per year. I know a lot of the anglers now fish over 200 days per year, but with all of what I do I just don’t have the time to do that, plus I think stepping away from it now and again has helped me stay in this game so long.

“After a while if it becomes just a job, I think many anglers might lose their passion for the sport. I never do. I hear some guys talking about retiring when they get to my age. Retiring isn’t anything I think about.”

Fishing as a pro for 52 years has given Jimmy plenty of perspective on what is important for him.

“Me and Chris got married when we were teenagers,” said Houston. “I’ve been fishing national tournaments since 1966 when I was a senior in college.

“I’m so fortunate to have my wife with me as my practice partner for all of those years. That has made a huge difference in our lives.

“I feel as though it has been a privilege fishing national tournaments for all these years and having such amazing sponsors. Plus, the fans! I mean at every launch, event, meet-and-greet the fans are incredible. They light up around me and tell me how they grew up watching me or similar stories. It’s an absolute privilege to get to meet so many people.