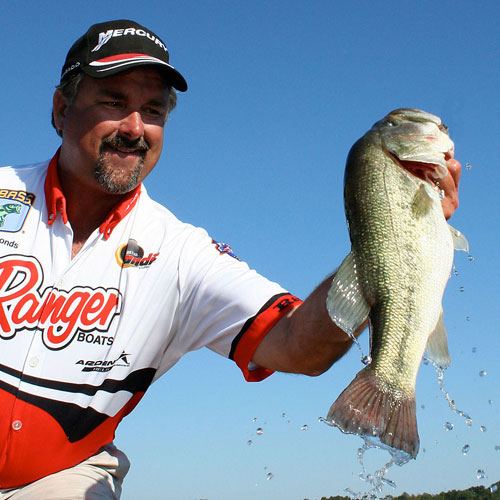 Bass Edge host Aaron Martin and his guest Elite touring pro Pete Ponds targeted the vegetation in Texas’ Choke Canyon Reservoir on this week’s show. They found the floating worm was the perfect bait for fishing such heavy cover. It was fall on the south Texas impoundment, but Ponds maintains that the floating worm is a great presentation whenever fish are buried in the grass.

“I fish it pretty much in shallow water around vegetation,” Ponds explained. “That works in the fall and spring when the bass are up in the shallows. In the fall, the shad move into the backs of the creeks into pockets and the bass pretty much follow. In the spring the males are up there making beds in preparation for the spawn and they are pretty aggressive. They will pretty much strike anything that is in their way.”

Ponds likes the floating worm because it is not bad about getting hung up in the vegetation and has an action that allows it to stay in the strike zone longer.

“It’s so effective because it suspends a lot. It has a lot of motion and it’s a bait you can move without it going very much forward.”

“One of the keys is to work it around the vegetation, pausing it to let it sink very slowly. The strikes usually occur when it is sitting still. Anytime you can get that bait sitting at almost neutral density it can be very effective. It has a kind of walk-the-dog-type retrieve.”

Color is more of a factor with anglers than with fish, Ponds believes. He says color decisions are best made on confidence.

“Colors have a lot to do with confidence, and confidence is 80 percent of fishing. I usually throw a methyolate finesse worm. I throw it because it is a confidence bait for me. I use almost exclusively florescent colors like methyolate, white or pink.”

The bright colors are preferred by Ponds and other anglers partly because of their visibility in the water. Often on a non-aggressive bite, the bait will simply disappear, letting the angler know the fish has the bait.

During the taping of the Choke Canyon episode, Aaron switched to a purple worm and was able to catch fish also. But he had to depend on feel to detect the strike. The fluorocarbon line he was using was likely a factor.

“When sensitivity is a factor, when it is not a visual strike, I like to use fluorocarbon,” Ponds said. “If I am fishing four- or five-foot deep, I would more likely use fluorocarbon.”

When fishing floating worms, Pond’s line choice more likely comes down to water depth and how fast he wants his bait to sink.

Ponds says that one advantage of throwing monofilament, or even co-polymer line, over fluorocarbon line is ease of casting. These lines will typically be easier to throw and will provide more distance than fluorocarbon with the light floating worm rig.

The floating worm often provides a very visual and exciting strike. There is little that gets the angler’s heart pounding like the swell on the surface of a fish taking the worm just beneath the surface. Aaron speaks with fondness of his days of taping on Choke Canyon with the floating worm, and it is likely he will be pulling it out of his box the next time he locates fish in shallow vegetation.