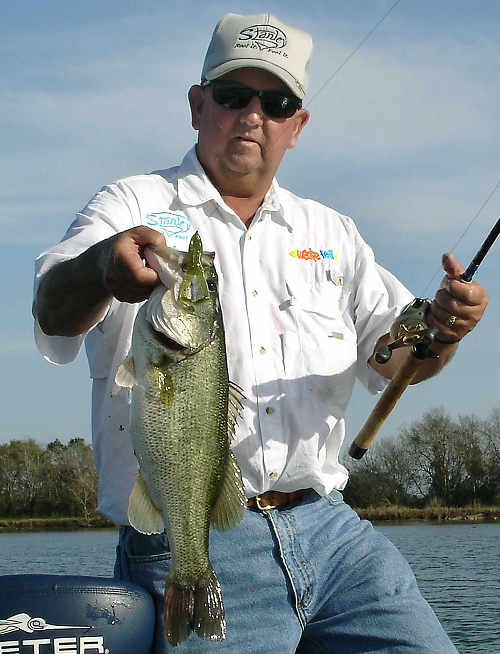 “Hot dang, fishin’ them frogs is fun,” joked Lonnie Stanley. However, no matter how much “foolin’” he was doing when he uttered that sentence, Stanley is dead serious about frog fishing. In fact, for a man who made his professional angling and lure making reputation with jigs, Stanley sounds as if he’s had some mid-life revelation.

“Don’t get me wrong, I still fish jigs,” Stanley said. “But, I love fishing frogs – especially in the fall. If you’ve never done it – don’t. Not unless you can handle seeing some incredibly violent strikes. When they hit that thing, they literally try to kill it. It’s not the type of fishing someone with a weak heart should do.”

Stanley, whose namesake company produces the popular Ribbit Frog, says unlike many other types of topwater baits, plastic frogs tend to get the attention of jumbo size largemouth bass with regularity.

“People don’t usually think of topwater baits as big bass baits,” Stanley explained. “And in some cases that’s true. But, let me tell you, if you buzz a frog over a big bass, she will hit it.

“I really think there are a couple of reasons for this. One, big bass just love frogs. If they get a chance to eat one, they will. This really seems like a bait they don’t need to be hungry to hit. They may have just eaten, but if they’ve got an easy opportunity to grab a frog, they’ll go for it.

“Secondly, unlike other topwater baits, you can put a frog back in thick cover where the big fish are. I mean you can throw these baits anywhere. Basically, if you can see a spot, you can throw a frog in there and not worry about hanging it up. I’ve put frogs in spots I wouldn’t even dream about throwing other lures.”

Stanley says a strong stick and braided line are often necessary for coaxing bass from such dense cover. But, before fishermen can think about landing a bass, they first much hook one. And, to make sure the hook finds purchase, Stanley says anglers are almost better off closing their eyes.

“The fish hit frogs so violently, it’s hard to imagine they don’t automatically hook themselves,” Stanley said. “But, they don’t. In fact, if you try setting the hook when you see the strike, you’ll miss the fish. You have to drop down and let the fish take it before setting the hook or you’ll miss ‘em every time.”

In order to ensure the frog can penetrate dense growth and come through unscathed, Stanley says it’s important to rig it weedless. Traditional weedless ‘worm hooks,’ will suite the purpose. However, an entire category of hooks has been designed specifically for frog fishing.

Bass eating frogs is no surprise, according to long-time Choke Canyon, Texas, guide Jerry Dunn. But, the most productive period for throwing artificial frogs comes as a surprise to some, he says.

“Everybody knows that a bass will eat a frog,” Dunn said. “But, when most folks think about frogs, they think about spring or summer. This is mostly because that’s when we see more frogs. Whether it’s on land or in the water, when you think frogs you think spring and summer. But, hands down, our best time for fishing frogs is in the fall. No doubt about it.

“This is really for a couple of reasons – neither of which really has to do with how many frogs are around. The bottom line is, if a frog and a bass cross paths, the bass will eat the frog. But, that’s the problem – making sure they cross paths.

“On hydrilla-driven lakes, that is, lakes where hydrilla is the primary cover, the surface hydrilla usually isn’t dense enough during spring. It usually takes all summer for the hydrilla to start matting up good on the surface. And, since your primary frog bait is going to be around these hydrilla beds, it’s necessary to have a good, thick growth of matted hydrilla on the surface. 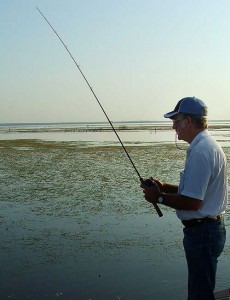 Choke Canyon guide Jerry Dunn fishes frogs in the fall because that is when the hydrilla has matted on the surface, and the bass have moved into shallow water.

“During fall, a significant portion of a lake’s bass population moves shallow,” Jones said. “So, there’s a lot of fish along the bank, which is important for frog fishing. When this happens, those in the know will go to a frog. But, the average fisherman doesn’t throw a frog. So, on most lakes, this isn’t a bait a lot of fish have seen.”

Jones says he feels the key to productive frog fishing is to “think outside of the box.”

“I used to think of frogs as a slot bait. And, they are. But, they’re so much more to a frog than that. You also hear a lot about frogs in dense cover. Yes, they are a great heavy cover bait. But, again, there’s more to it. Basically, I’ve got two criteria for throwing frogs – water temperature over 60 degrees and lots of shallow bass. If I’ve got those two things, I feel like I can produce fish with a frog.

“One of the reasons for this is I don’t think the fish always think that lure is a frog. I’ve seen bass – big bass – chase down and hit a Buzzfrog on an open stretch of water. I’ve also seen them hit it in lakes where there really aren’t any frogs. In fact, I love fishing Buzzfrogs on lakes that don’t have a lot of frogs. I’m not sure what those fish think it is, but they nail it.

“A great example of that is right here at Lake Waco. There is no grass, yet a frog works great. If you’re simply thinking along the lines of predator and prey, they shouldn’t work. But, they do.

“One of my favorite tricks on that lake – and lakes like it – is to throw frogs around rocky points. I mean throw right on the rocks and drag the frog off. Usually, they’ll strike in the first few feet. And, you’ll get your biggest strikes right after the frog enters the water.”

Because he believes artificial frogs are often mistaken for other prey items, Jones says he varies the color of his lures.

“My favorite frog colors are black/blue fleck, watermelon and white,” Jones said. “I especially like white in the fall. Again, this goes back to the fish may not always think the bait is a frog. I think a white Buzzfrog mimics a baitfish pretty well.

“One thing about frog fishing and color – if the fish are on a frog bite, they will show themselves. You may not be getting strikes, but if you see fish coming around your bait, you know they’re on a frog bait. If they’re following, but not hitting, you know you chose the wrong color. Keep switching until you find one that will get them to hit.

“That’s a great advantage when you’re frog fishing – the fish will show themselves and let you know what you need to do. With so many other types of lures, you really don’t know what’s going on. You don’t know if you’ve got the wrong bait or the wrong color. These fish will let you know.”

Jones says he also uses frogs to probe those hard to reach places. But, again, he doesn’t necessarily do it in the traditional manner.

“The other great thing is you can put a frog where you can’t put other baits. You always hear about guys using frogs in heavy cover. Don’t get me wrong, I use them for that, too. But, I also like using them in other areas, like under docks. They’re heavy – so they cast well. And, the wide body of the frog allows it to skip under docks real well.

“When I’m skipping under docks, I’ll use a six-foot, six-inch medium/heavy Kistler Helium rod. This is a lightweight rod and with that length, you can be real accurate. When I’m skipping, I’m usually using a sidearm cast. Distance isn’t that important, but accuracy is.

“A lot of guys are intimidated by trying to skip under docks. But, using that frog makes it real easy. Using one of those rods, the average guy can get pretty good skipping under docks in about an hour.”

Although each of these pros have a little different approach, they all agree fall frog fishing is an exciting and productive way to catch quality bass.

“What I really love about frog fishing during October and November is the kind of bass we catch,” Dunn said. “It’s not unusual to pull eight- or 10-pound bass out of the hydrilla beds with frogs. There’s not a lot of topwater baits that consistently produce those kind of bass. And, you can imagine how hard those fish will hit a frog.”