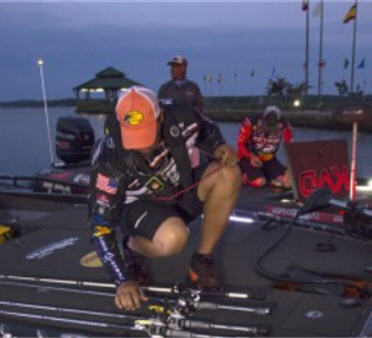 For many anglers on the Bassmaster Elite Tour, the competition in 2017 offered a diverse opportunity to test their skills within vastly different fisheries on a variety of bodies of water in a multitude of water conditions.

Time and again, anglers had their back to the wall trying to scrounge out a limit or seal out a win. In that moment of truth where they only had seconds to decide their game plan, they reached for the one lure that they were willing to fall on their sword with.

Here are three successful professional anglers talking about THE favorite one fishing lure they always have.

Shop Bass Pro Shops for all your fishing needs here

“It opened the season, it closed the season, and I had a lot of big tournaments in between,” Iaconelli said. “Starting at Cherokee Lake, I caught half my fish on aMissile Jig Mini-Flip Jig and the last tournament during the final classic bracket round, I caught almost all of my fish on it. I caught them in Tennessee in cold water, in Minnesota in warm water, and everywhere in between.”

Mike Iaconelli believes the smaller profile jig does a better job imitating the bluegill and crawfish in many of the lakes he fishes both recreationally and during the Bassmaster Elite schedule.

What’s unique about the jig is that it is still small and compact but weighs a ½-ounce allowing for better casting, skipping, and pitching. The only real colors you need are bruiser black/blue color jig and green pumpkin jig.

“It’s small, its compact, and it’s a different bait when everyone is throwing something else, the smaller profile jig will get the bites,” he said. “When the fishing is tough or when faced with cold fronts, clear water and heavy pressure it gets more bites.”

Ike pointed to Bassmaster jig-fishing legends like Denny Brauer and Tommy Biffle who were really the reason many anglers started fishing big standard profile jigs. Although the technique originated in California from anglers like Dee Thomas and Dave Gliebe, today it has evolved into a technique where one size no longer fits all.

When it comes to selecting jig trailers, in cold water he’ll fish a regular chunk and a trailer opting for a trailer with more action in warmer water.

The 3-inch Berkley Chigger Craw bait works perfectly in those situations. Iaconelli will remove the first two segments of the craw and secure the bait to the head of the jig and hook shank with a dab or two of superglue.

For pro angler Ott DeFoe, his favorite fishing lure this year was the Terminator Pro Series jig. He used it to catch fish at every stop on the Bassmaster Elite tour except for Lake St. Clair. He swam a white jig during the shad spawn on Lake Okeechobee and flipped docks with it on Lake Champlain. Most times he’ll opt for a Bass Pro Shops Bass Pro Shops Swim-N-Elite Chunk craw bait for his trailer.

Regardless of whether he’s fishing a Bassmaster Elite or Major League Fishing event, Kevin VanDam has become synonymous with fishing a jerkbait.

“It’s something I’ve been doing my whole career, but now with all the live coverage, I can’t hide it anymore,” he said. “It’s opened a lot of people’s eyes about how to fish it and just how versatile a bait it is in a lot of different situations.”

Today, he sees his competitors fishing a jerkbait in only situations that only KVD would have.

VanDam pointed out that bass will never get conditioned to a jerkbait bait. It triggers a natural feeding response that they cannot suppress.

He pointed to Strike King’s extensive and constantly expanding collection of color offerings in the Strike King KVD line of jerkbaits, both shallow and deep runnining.

He’s especially excited about some new perch colors due to be released soon.

At times, he will add some color to his jerkbaits. “I might add an orange throat patch or a chartreuse patch to it to brighten it up,” he started. “Or, I might tone it down with some grey. I do have the ability to brighten up a bait or tone it down a bit.”

Yes- nail polish. “To add some poly flake dust on the fly, I just use some clear nail-polish, put it on there then you can put another coat over it. It’ll come off but it is pretty quick and easy,” VanDam said.