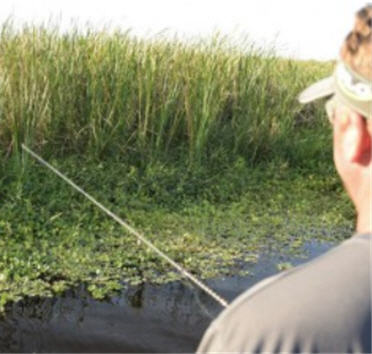 JT Kenney fishes the FLW Tour and is a good ‘ol Florida boy. You give him a flipping stick, some matted vegetation and his favorite punch baits and he’ll be putting money in the bank. While many anglers shy away from fishing heavy vegetation, Kenney is well aware that’s where the biggest fish live during key times of the year. Many anglers only attribute heavy mats to expansive hydrilla, milfoil, or hyacinth beds, but Kenney disagrees.

What Exactly is Matted Vegetation?

“If there is a big offshore grass bed that boats are running through, all the chopped up weeds will blow to the opposite shore if the wind blows in the same direction for a day,” Kenney started. “In the spring when the lakes rise, the debris flows into a pocket and collects along the bank creating “sawdust mats”. Kenney also noted that it doesn’t have to be a seasonal deal, it can last 12-month out of the year.

Be sure to experience fishing where the big fish live with these 10 tips how to fish matted grass with pro angler JT Kenney and watch two of his fishing videos.

1. Differences in Fishing a Good vs Bad Mat

Mats that are solid from top to bottom look great but bass don’t love them. Kenney prefers mats that are tightly matted on the surface yet “cavernous” or hollow underneath which is the result of weeds that have decayed or died off and provide an empty void for fish to hide from direct sunlight. “What you want in a good mat is thick on top and open underneath where when your bait punches through then it is a freefall to the bottom,” he said.

Kenney prefers smaller mats the size of a hood of a pick-up truck instead of large expansive ones.

On lakes like Ticonderoga in New York that have big expansive mats, Kenney treats them like they are their own lake. “If you see one that has a lot of indifferences and irregularities and edges that turn different ways, those little areas typically will hold more fish than just your perfectly round mat,” he said. From there, he’ll try to pattern the fish in relation to where they are positioning in the mat.

Contrary to popular belief, largemouth bass rarely bury themselves in the middle of the mat. Most times Kenney finds them on the inside edge closest the bank or the outside edge.

At Lake Champlain near Ticonderoga, while the inside of the mat might only be 2-feet deep and the outside is 8-feet deep, Kenney has found them sitting in 4- to 6-feet consistently throughout specific mats.

On a lake like Okeechobee that is flatter and much looks the same, it is still the irregular edges that are the deal.

If Kenney isn’t quite sure where the fish are positioned, he’ll fish the outside edge of the mat first with a vibrating jig or a swim jig. If he knows that they are under the mats, he’ll start flipping and pitching right away.

3. It’s a Game of Fishing Angles

Sometimes getting the bite isn’t the issue, getting the fish out of where they are can be! “If it’s a thin mat, and it’s not real hard to get the fish out of, I will pitch way back in there,” Kenney started. “If it’s a real thick mat, when you pitch way back in there, the angle of your line is not a straight vertical approach. When you get a bite and are trying to get that fish up out of the mat, on a really long pitch, the angle of your line is almost trying to pull the fish through the mat instead of up out of the mat. In a real thick mat, real long pitches are not a good idea.”

Instead of push poling through a big mat, Kenney will use his big motor if he has a fair distance to travel.  Sure, everything behind you will be destroyed for the day, but after 5- to 10-minutes, those fish in front of the boat will settle down again and be ready to bite.

Tactically dissecting each mat is key. Normally, he would start fishing targets close to the boat and then branch out.  Due to the commotion created by motoring through the mat, Kenney’s belief is that by fishing targets furthest from him, those fish left undisturbed will be ready to bite. At the same time, he’s strategically allowing those closest to him, most impacted by the noise, time to settle down.

Kenney advises anglers to use the lightest sinker possible while efficiently penetrating the mat. Experience has taught him that the bigger the weight used, the lower the hooking percentage. Sure, fishing mats is hard work and a heavier weight falls through much easier, but the goal is hooking and landing fish.
“I very rarely use a 2-ounce weight even when I should. I’ll usually have a 1-ounce and 1 ½ ounce on the deck and use the lightest one that I can to penetrate the cover. Again, a 1-ounce has a better hook-up ratio than a 1 ½-ounce.  The weight is so big that it opens their mouth before the hook is even in it,” Kenney started.

Kenney prefers baits that have a thicker rounded body. “If your hook is popping out of your punch bait all the time, and you’re constantly putting the hook back in, you aren’t very efficient. A bait that keeps your hook in there pretty good, allows you to get a lot more flips in at the end of the day.”

Since punching involves a 7’11 heavy to extra-heavy action flipping stick like the Halo Titanium 7’11” JT Kenney Signature Series Xtra-Heavy with Sunline BX2 60-pound braided fishing line spooled on an Ardent Apex Grand baitcast fishing reel with 7:1 gearing, Kenney pointed out that a ¼-inch more rubber will not affect hook penetration. Constantly fumbling with your set-up is going to become cumbersome, frustrating, and inefficient.

If fish are active, he prefers a fishing bait with kicking tails like a Gambler Ugly Otter lure, Gambler Burner Craw, or the Gambler Y Knot which has the same body as the Burner Craw but fishes more like a beaver-style bait.

Super thick vegitation mats or nasty cold fronts call for a smaller, more compact, bait like the Gambler BB Cricket lure which despite it’s 3-inch size has put some monster fish in the boat.

7. When it Comes to Fishing Hooks, Bigger Isn’t Better

Kenney fishes the straight-shank Lazer Trokar Big Nasty 3/0 hook with the BB Cricket bait and a 4/0 for the rest. Often we hear anglers talk about using monstrous hooks for larger than average largemouth bass.  Kenney disagrees, “While the 5/0 would hook a little bit better, a lot of it hangs out of the bait and it doesn’t slide through the mat very easy.  It’s all about efficiency and making as many flips as possible.”

Quite often, bass will give anglers subtle clues.  When Kenney pitches a bait in and his line starts swimming away, he believes it is because there are other fish competing for that bait and the one he hooked is trying to take it away from the others. That said, he’ll drop both of his Power Poles down and methodically pick apart the area.

When anglers are fishing matted vegetation with heavy action rods and weighty sinkers, they best adjust their hook-set to make sure that every bite comes into the boat.  Time and again, Kenney has witnessed anglers drop their rod tip and set the hook on a slack line and come up empty. “With that big weight, you‘re going to blow that fishes mouth open with a slack line set. The biggest thing is initiating your hookset on a taught line,” he said.  Keeping his rod at 9 o’clock and parallel to the water before setting the hook, he’ll turn his reel a couple times to keep a taught line but not so much that a bass will feel him.

Watch video: When you’re flipping mats you can be catching a giant bass in the super heavy cover like this lunker.

10. Be Stealthy When Pitching Your Bait


Take the time to learn how to pitch accurately and quietly.  Often anglers will pitch a bait onto a pad and try to shake it through- not good. “If it lands on the pad and you have to shake it to get it to fall in, I’ve gotten bit but generally, I’m not happy. A lot of times they don’t bite it,” Kenney said.