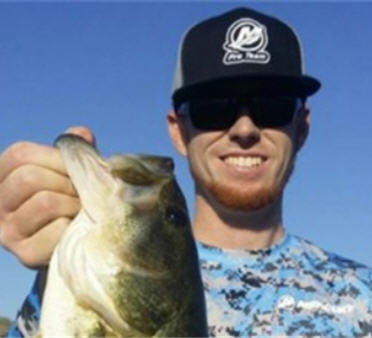 It certain parts of North America, temps consistently hit 110 to 115°C during the day.  Such conditions make it almost unbearable to fish- that is unless you’ve learned to fish at night like Arizona resident and Bassmaster Elite Pro Josh Bertrand.

Not only is it smoking hot during the day, but the boat traffic can often be chaotic.  For those who work during the day, they might not have any other choice!  Fishing at night offers a serene and relaxing atmosphere.
“You can catch big fish at night and a lot of times, are more active at night than during the day,” Bertrand started.  “Unbeknownst to the crayfish who become more active once the sun sets, big fish like to hunt aggressively at night.”

Bertrand fishes the same spots he would during the day- just slower. Whether it be a good underwater ridge, ledge, rock pile, ditch, or a brush pile, fish are still going to use it at night because it provides them with an ambush point.

“In the heat of summer, a shallow gravel bar that is only 4-feet deep that you might never fish during the day might see bass move up at night to hunt for crawfish.  On a long sloping point that runs out 100 yards where you would catch them on the tip of it in 20- to 25- feet of water, at night, those fish might just swim all the way up to the point and start eating crawfish in 2-feet of water.”
He’ll run Panoptix and 2D imagery on his Garmin GPSMap 7612 units to find key structure.  A GPS is a no-brainer since you can’t use landmarks to line up on as you would during the day.

Rules of the Night Fishing Game

Safety is paramount when night fishing.  “I would not suggest fishing by yourself.  I night fish all the time- but never alone,” he said.  “If anything went wrong and you were by yourself, and they are more likely to go wrong in the dark.”
Wearing an inflatable life vest is a good idea as is wearing a headlamp.  A head lamp helps him to look towards shore if need be, move around the boat, watch his line, or net a fish while still affording him the use of both hands.

Tip: Which Life Vest Should You Buy? Here are Ten Examples With Pros & Cons

He also likes to have a high-powered spotlight at the ready.  “Things happen, so you need light quickly,” Bertrand said.  He’ll keep on hand on the wheel, the other on the spotlight while using his hot-foot pedal to power the boat.  He’ll be lucky to break 40 mph while driving at night and is wise to travel the safe routes that he’s saved during his daytime fishing.

Bertrand moves slowly around his boat, his Motorguide X5 trolling motor never greater than 30%, and keeps the deck of his NITRO Z21 boat uncluttered with no more than 3 rods on deck.  Be stealthy.

“At night, most of the time it’s glass calm and you rarely have to deal with waves or boat wakes,” Bertrand started.  “If it’s windy, there’s probably a storm and you shouldn’t be out there anyway.”  Bertrand suggests anglers use a seat if they find keeping their balance to be an issue at night.

As a matter of safe practice, he always keeps a kit in his boat stocked with extra clothes, blankets, head lamp, spot light, and an extra pair of the prescription glasses that he wears.  Sometimes he’ll even keep doubles, after all, stuff breaks.  He wears his prescription glasses at night instead of contacts to offer his eyes protection from hooks and lures.
Tools of the Trade

Bertrand is a big fan of a 10-inch Berkley Power Worm in black grape or black with blue fleck as they provide a good silhouette when fish are looking towards the moonlight.
He’ll also dropshot in deep water with a 7-inch Berkley Power Worm rigged on a 3/0 hook, ¼-ounce weight on a light-action Abu Garcia bait cast rod.
The new Berkley Dredger deep-diving crankbait is going to be an awesome night-fishing bait according to Bertrand.  He’ll fish the red craw and darker hued baits on a 7’11” Veracity Winch Rod, Abu Garcia Revo Winch reel spooled with  10-pound Berkley 100% Fluorocarbon.

He did note that Berkley XL and XT in clear blue glow in the dark as does yellow Berkley Nanofil.

One of his favorite ways to catch’em is with a single blade Bass Pro Shops Colorado XPS ½- ounce spinnerbait with a matching black blade that he’ll rig with a trailer hook and thump along the bottom with.

Bertrand stresses that anglers watch their line.  “At night, a black light with fluorescent line helps you to see those big fish swim off to the side where you don’t always feel the weight,” he said.  Running off a 12-volt plug, he prefers the Rigid UV light kit that he’ll secure to the inside hull of his boat with suction cups and shoot it forward to help him see his line.  UV light is much subtler, doesn’t attract bugs, and doesn’t spook the fish.