How Does Ish Fish? Tips to Fish With Surface Frogs 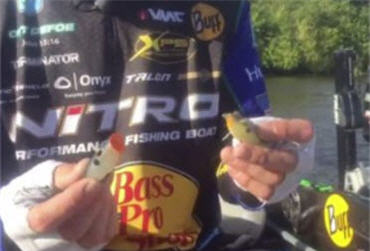 Topwater frog fishing can be addictive! For Ott DeFoe, his comfort with the frog has been an evolution made possible once Terminator introduced their Walking and Popping frogs.

He admits he’s not perfect at it but tries to improve his frog fishing skills every day.  “Sometimes I take a deep breath before I even cast and tell myself from the start not to jerk too fast,” he said.  He’ll try to gauge their mood from the first couple he catches.  “Once I get some confidence, then I can plan for it and anticipate where they are going hit and when.”

Shallow water and grass are a great recipe for topwater frog fishing. “If the water is 60-degrees or better, you can catch them on a frog,” he said.
This past spring, DeFoe fell just short of his good buddy and fellow Bass Pro Shops pro-staffer, Timmy Horton, who won the Bassmaster Elite event on Lake Okeechobee.
He had a two-pronged approach at Okeechobee that almost gave him the win.
“In the morning, the shad were spawning in dollar pads. But, there was nothing else you could fish on the surface while keeping it in the strike zone that was weedless enough to perform,” he said.

DeFoe used the Terminator Popping Frog to place 14th at the 2016 Bassmaster Elite event at Toledo Bend by thinking outside the box.

“In the morning, it was a standard shad spawn that were up in the hay grass. In the afternoon, there were still a few shad in them but there was actually a different kind of baitfish in it,” he said. Being a Texas guy, he consulted fellow competitor Alton Jones only to learn they were fathead minnows- not shad.
Come noon, the minnows would bust the surface again and while DeFore threw every lure imaginable, even the popping frog that worked in the morning didn’t produce.

The bass would blow up on the bait, pull it under, but only eat the legs never getting the hook in their mouth.
Then he cut off the legs thinking he’d cracked the code- but they refused to hit his frog at all.
He dug out a ghost pearl shad colored frog- white but still translucent at the same time- and sped up his retrieve. It looked like a flittering baitfish, and the fish came unglued totally pulverizing the frog.
Walking vs Popping Frog Fishing

DeFoe fishes only two frogs, the Terminator Popping Frog and the soon to be released Terminator Walking Frog Jr. due to be released at iCast 2017 in July.
He’ll guage the conditions he’s faced with, like wind, to decide on which frog will work best. “If fish are in water 4-feet deep, I need something with the drawing power to pull them up. That’s when I going to reach for that popping frog almost every time.” In similar conditions but still shallow water, the popping version still gets the nod.

When it’s shallow water and glass calm, the walking frog like the Terminator Walking Frog or soon to be released Terminator Walking Frog Jr is your best bet.
He’ll only fish the full-size walking version if he’s fishing in a lake known for monster largemouth, like Lake Guntersville.
DeFoe’s favorite colors include, black, white, ghost pearl shad favorite, smoke silver shad and hot mud camo with coco camo being is favorite of them all.
“I’ve seen a specific color of the same frog getting bites account for 70% of the bites,” DeFoe reasoned.

As long as the water temp is above 65-degrees and the fish are not spawning, he’ll work his frog at a pretty good clip to draw a reaction bite. If he’s fishing a solid mat, he’ll slow it down to allow fish to find the bait.  He’ll also add glass rattles to the frog hoping the added weight will left a better indentation in the mat for the fish to see below.
He’ll also slow the bait down when water temps are cooler than 65-degrees or when fish are spawning. “I’m going to fish it slower to let those fish find it and aggravate them and to eat it,” he said.

Like most anglers, he’ll open up the hooks a touch if his frog seems swelled up or if fishing hooks get into the body after a cast.
On the sneaky side of things, he’ll swap out the leg colors of his frogs for another.
Using a line threading needle, he’ll take a piece of braid, double it, tie an overhand knot to create a loop. He’ll then pull that line through and stick an inch of the legs through and pull until both legs are even with the center.
To keep the legs from sticking together or melting under hot summer temps, he’ll douse his frogs with baby powder.

His weapon of choice is a rod and reel combo rigged with a 7’4” Johnny Morris Platinum baitcast fishing rod paired with a Bass Pro Shops Carbonlite 2.0 reel sporting a 7:5:1 ratio.

Unlike the majority of his competitors, he uses 30-pound BPS XPS Braid in pads or open water. He’s never broken it, likes the way it feels, likes the way it handles, and because it is thinner and softer it is easier to cast and gives more action to the bait.
The thinner line also cuts through heavy vegetation easier DeFoe suggests.

The hardest part about hooking topwater bites is not swinging on the explosion. Ask any skilled angler and they’ll tell you, when fishing a soft-bodied topwater, those fish are not going to immediately let go of it! How many tournament anglers have avoided trying to set the hook during pre-fish, often letting fish swim around with their lure, hoping they’d drop only to watch fish hook themselves!

Instead, upon seeing his frog get attacked, DeFoe will hold his rod and start taking up slack until he feels some weight. Once that happens, he’ll swing hard on them.
Back to his tournament at Toledo Bend, he had to work his frog at an extremely quick clip. “I was almost not even twitching it- pretty much bringing it!” he said.
If you plan on fishing frogs for the day, be sure to scale back on your caffeine intake that morning!

“The typical frog bite is the fish come up and suck it under. Those bass at Toledo, when they would blow up on them, more of them would cartwheel over the bait and land on it on the way down,” DeFoe started. “Some would hit it on the way up. It was the coolest frog deal I’ve ever been on!”