A Guide to Choosing Baitcast Reels

A Guide to Choosing Baitcast Reels 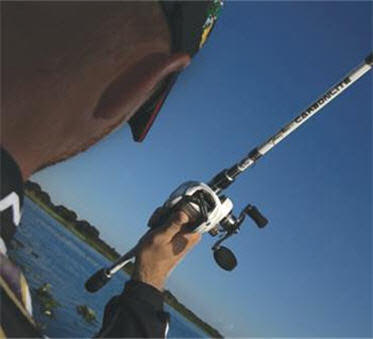 Posted by Justin Hoffman and BassProShops1Source

Many anglers shy away from baitcast reels due to some common fears. Hearing the dreaded term “bird nest” evokes a reluctance to give these reels a fair shake. Misconceptions that they are “difficult” to learn can also keep folks on the periphery. If truth be known, the baitcast reel is a necessary tool for those that fish, giving an angler the ability to utilize certain techniques and presentations, while also using heavier line. With a little practice, baitcast reels are quite easy to master, and for most that spend any amount of time on the water, they often take the place of the spinning reel for the brunt of the work.

This buyer’s guide will give you the information needed to make an informed decision on what to look for when buying a baitcaster — and what makes them the perfect addition to your reel arsenal. A simple definition for a baitcaster is a reel that has a revolving spool and sits on top of a casting rod with a trigger handle. This is exactly opposite to a spinning reel, which sits underneath a spinning rod and with the line guides facing down.

Casting reels like the Lew’s Custom Inshore SLP Casting reel come in both left and right-handed models, with the latter being the most popular. Handles cannot be swapped out as they can with spinning reels, so choosing what is the best fit needs to be established. Many right handed people use right handed reels. However, with this set up, after a cast is made, the reel is placed in your left and the handle is cranked with your right hand. It is the exact opposite for a left handed model.

For those that don’t want to switch hands, choosing a configuration the same as your spinning reel set up may be the best choice. Round vs Low Profile Baitcast Reels

Choosing the Gear Ratio for a Baitcast Reel

All reels have a gear ratio. Simply put, it describes the speed of the reel. Common gear ratios in baitcast reels are 5.4:1, 6.4:1, and 7.1:1. But what do these numbers mean? The first set of numbers lists how many revolutions the spool makes for each turn of the reel handle. For instance, with a 6.4:1 reel the spool will revolve 6.4 times with one crank of the handle. The higher the number, the more line that can be retrieved within the same amount of work.

The most common reel on the market has a 6.4:1 gear ratio. This will allow you to work both fast moving presentations as well as slow. However, for certain techniques and applications, a very high or low gear ratio will often work best.

For instance, burning a spinnerbait or buzzbait is best done with a 7.1:1 reel. Working a crankbait, on the other hand, is more effective with a slower gear ratio, such as 5.4:1. Higher gear ratios are often better when fishing areas of small strike zones, as they allow your bait to get back to the boat in preparation of another cast quickly and effortlessly.

If in the budget, purchase one of each to cover all of the bases.

Baitcast reels come equipped with braking systems. These adjust and slow down the rotation of the spool during the cast. Without this, the dreaded backlash would be forever happening. (For those unaware of the term, it describes the knotted mess of line you are left with when your spool continues to revolve after your lure has stopped moving forward.)

The spool tension knob is your first line of offense for adjusting spool speed. It is the large knob found on the reel handle side. Tighten this knob enough, so that when you disengage the reel, your lure will slowly fall to the ground. Once it makes contact, the spool should stop revolving almost immediately. The heavier the lure, the tighter the tension should be. 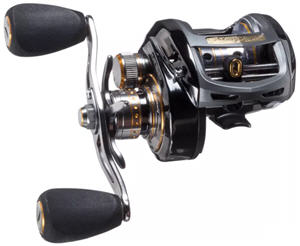 Centrifugal brakes are friction based, and utilize pins inside the side plate of the reel to make adjustments. To engage the brakes, push the pins outward. For a six-pin system, always adjust pins that are across from each other. Both should be either on or off.

Magnetic brakes work on a more complicated principle, but rely on the spool and magnets to decrease the spool revolution rate. They are also adjustable by the angler.

No matter what breaking system a reel has, learning to thumb the spool correctly is still your best bet for trouble-free casting. Fine tune each time you’re on the water with the various breaking systems, but let your thumb do most of the real work.

Other Things to Consider in a Baitcast Reel

Frames: Come in either aluminum or graphite, with the latter generally less expensive and lighter in weight but not won’t withstand much abuse as aluminum. High-end reels are usually manufactured from one-piece aluminum frames.

Ball Bearings: Top of the line reels don’t necessarily need to have a lot of bearings, just quality ones. Inexpensive reels packed with “10” bearings will often be of poor quality. Key words to look for are “shielded,” “double-shielded” and “sealed bearings.” These are the top players in the bearing game.

Spools:  The majority of baitcast reels come with an aluminum spool. High-end reels are constructed from forged aluminum, whereas less expensive reels are die-cast. Forged spools are more rigid and harder to scratch. Spools with holes drilled in them are lighter in weight and are easier to stop and start spinning. Most, other than the most inexpensive reels on the market, have drilled spools.

Handle: Soft rubber knobs or those designed as oversized work better for many.

Line guides: These are made from either titanium or ceramic, with the latter being less expensive but can crack or break from alleviated abuse. High-end reels are usually manufactured with titanium.

Spinning reels do work well for many applications, but if you would like to try your hand at flipping or pitching, working heavy cover, chasing big game fish, or throwing heavy lures, then a baitcast reel is a necessary addition to your reel collection. I promise. They really aren’t as scary as you may think.